The 25th Kala Pola is nearly upon us and with it, some of Sri Lanka’s finest visual artists on display. For a quarter century, the George Keyt Foundation’s art market has kept its promise, delivering great work, time after time. This carefully curated affair has been supported ardently by the John Keells Foundation for 24 years of its existence, making the foundation one of the island’s original patrons of the arts. Over the years both foundations have seen the art market grow exponentially as more artists and more art forms get added to the portfolio over the years. Today, the festival boasts several mediums including oil, watercolour and acrylic paintings, sculptures in many forms made of stone, metal or ceramic, and of course mixed media work (combination of 2 or more of these forms) that is all the rage.

Let’s take a closer look at some of this work:

A classic art form that finds itself rooted in the 15th century, oil paintings are a favourite among art buyers and probably among the most widely available work at Kala Pola. The process of oil painting involves painting with pigments, combined with a drying oil like linseed, poppy, safflower or walnut oil. Here are some of the oil paintings the Kala Pola has exhibited over the years: 2011: A series of oil paintings in the background

Watercolour paintings are arguably among the most ancient in the world, dating back to the age of the cave man. In fact, watercolour paintings were also used since ancient Egyptian times as a form of illustration to accompany manuscripts. It’s popularity however, only rose during the Renaissance. Let’s look at some of Sri Lanka’s own watercolour work seen at Kala Pola: 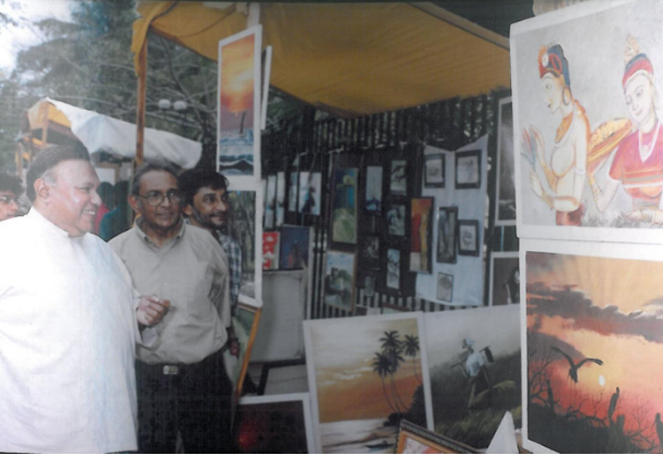 Before 2005: A series of water colour paintings While its watercolour and oil avatars are much older, acrylic painting only began to explore itself in the late 1930’s. The medium involves the use of a fast-drying pigment paint suspended in an acrylic emulsion. The results resemble various and at times, almost fantasy textures across the painting’s surface. Look at how Kala Pola artists present acrylic work: 2011: A series of acrylic paintings 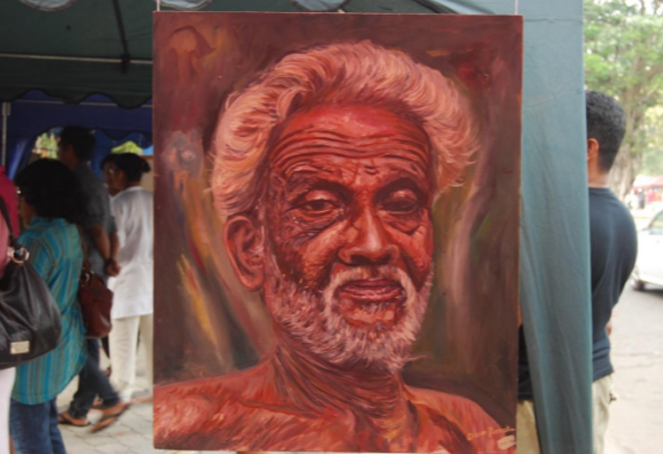 Stone sculpting is possibly one of the world’s oldest artforms, predating recorded civilization itself. An abundance of stone sculpture work can be found in Greece, Egypt, neighbouring India and of course within our own shores. We are particularly interested in showing you how contemporary artists have used the medium and displayed work at Kala Pola: 2017:A child holding a stone sculpture 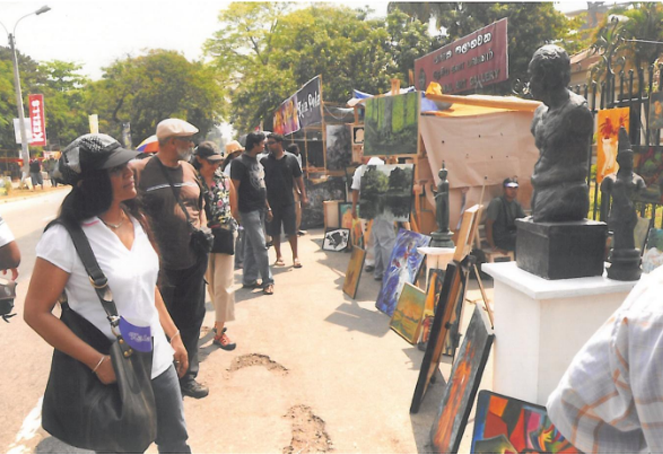 Sculpting with metal rose in the Bronze Age where bronze sculpture was the in-thing, being commissioned by kings and religious leaders alike. 21st century Lankan sculptors also have their own take on metal sculptors and Kala Pola has had the benefit of being able to display some of the best among them: 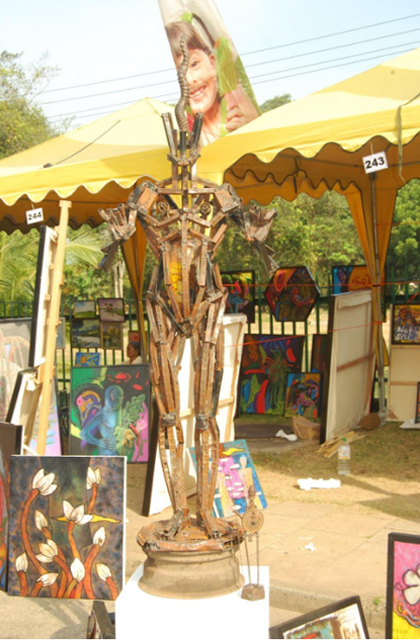 Ceramic based art has a long history and its roots deep in several cultures around the world from Greece amphorae to Chinese table wear. To be mould and surface paint creates a combination of art forms that are at best, quite spectacular. The Kala Pola artists also present ceramic art and sculpture from time to time. Here’s a look: 2006: A series of white ceramic sculptures 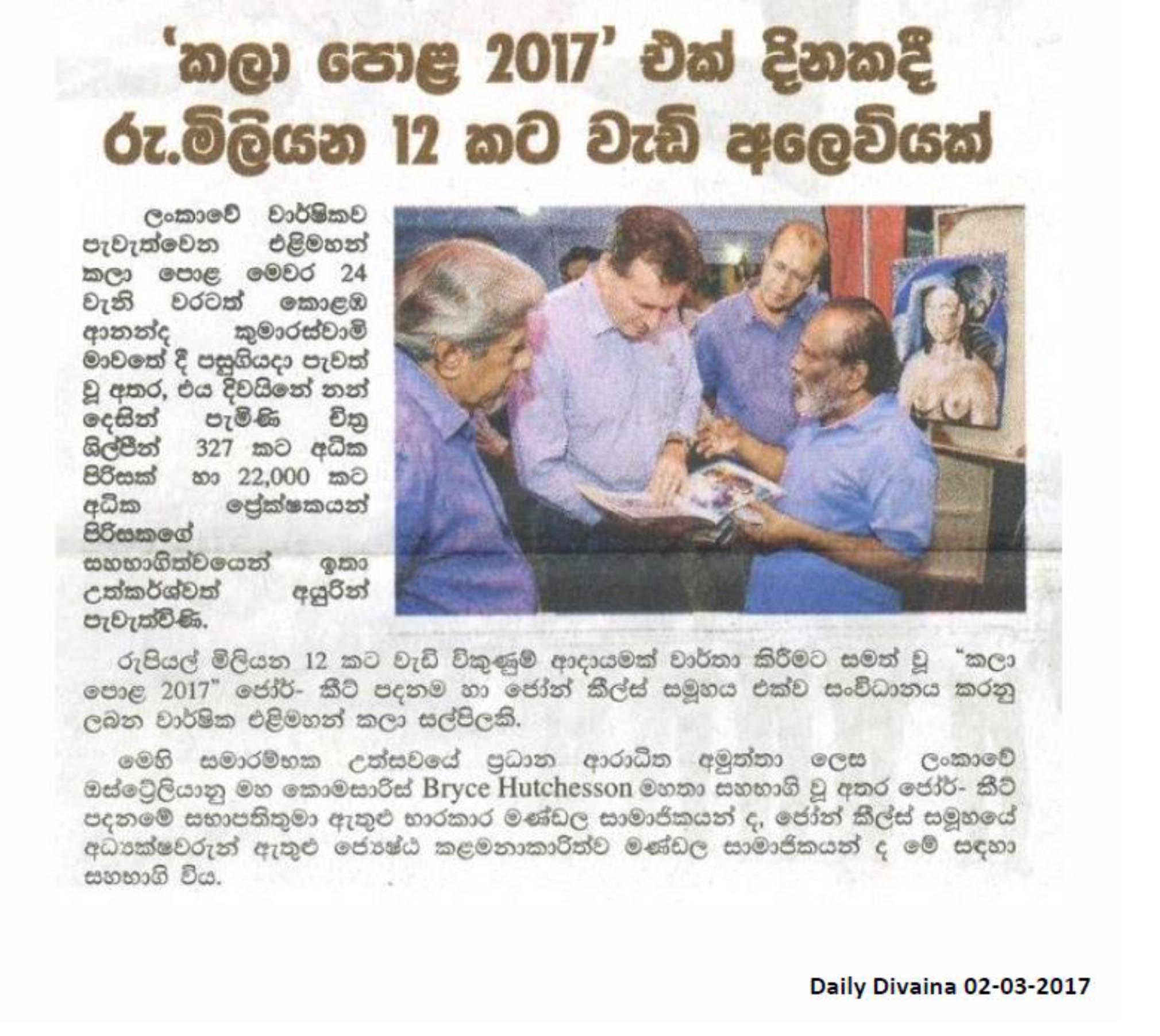 Conceptualised by The George Keyt Foundation and launched in 1993 with only 35 artists, Kala Pola has enjoyed the unbroken patronage of Sri Lanka’s premier conglomerate the John Keells Group since 1994. It has evolved as a popular annual event in the Sri Lankan Art Calendar, hosting approximately 300 painters and sculptors from various parts of the country and over 20,000 visitors both local and foreign each year.

While Kala Pola was initially inspired by the concept of open air summer art fairs in European capitals like the legendary Montmartre in Paris, the underlying rationale for its existence goes beyond the search for fascinating colour, exuberance and camaraderie.

The primary objective of Kala Pola is to provide a platform to launch and sustain the careers of talented artists and sculptors, foster the development of a clientele, facilitate the exchange of ideas among artists for collective growth in style and genres, and promote art as a potent and professional career. Over the years, Kala Pola has also become a reputed means of popularizing the appreciation and patronage of visual art by the general public in a fun-filled atmosphere of music and camaraderie.

In recent years Kala Pola has showcased approximately 300 artists per year generating over Rs.13 Million in sales (for which John Keells Foundation takes no commission). The event attracts an increasing number of visitors both local and foreign each year with recent figures estimated over 22,000. Many Kala Pola artists have gone on to carve out successful careers in the local and international arena.

The George Keyt Foundation (GKF) was established on 18th of June 1988, during the life-time of the iconic Sri Lankan artist, George Keyt, to foster visual art and artists. George Keyt very graciously decided to gift GKF with a landmark collection of fourteen paintings and six drawings which he had in his possession in England. The generous support and assistance of Sri Lanka’s largest conglomerate, John Keells Holdings PLC, and its then chairman Mr. Ken Balendra enabled GKF to have these valuable pieces of art brought back to Sri Lanka.

John Keells Foundation (JKF) is the Corporate Social Responsibility (CSR) entity of the John Keells Group. Since its establishment in March 2005, JKF is the prime driver of the Group’s CSR initiatives from the centre within six Focus Areas, namely – Arts & Culture, Education, Health, Environment, Livelihood Development and Disaster Relief, reflecting the diversity within the John Keells Group. All initiatives carried out by JKF are Medium- Long term strategic and sustainable projects aligned to the Sustainable Development Goals as well as the United Nations Global Compact. JKF is company limited by guarantee and is also registered under the Voluntary Social Service Organizations (Registration & Supervision) Act.

John Keells Holdings PLC (JKH) is Sri Lanka’s largest listed conglomerate in the Colombo Stock Exchange. From managing hotels and resorts in Sri Lanka and the Maldives to providing port, marine fuel and logistics services to IT solutions, manufacturing of food and beverages to running a chain of supermarkets, tea broking to stock broking, life insurance and banking to real estate, JKH has made its presence felt in virtually every major sphere of the economy. Since its modest beginnings as a produce and exchange broker in the early 1870s, JKH has been known to constantly re-invent, re-align and reposition itself in exploring new avenues of growth.

JKH is a full member of the World Economic Forum, and having issued Global Depository Receipts on the Luxemburg Stock Exchange, was the first Sri Lankan company to be listed overseas. As a Member of the Global Compact – the United Nations-sponsored international corporate citizenship initiative, JKH is also committed to sustainable development and greater social responsibility, in a multi-stakeholder context.